Well, I've decided to undertake a display model project. I really haven't done something like this for decades...building a model just to have it and put it on display. No gaming application whatsoever. It feels weird.

A few weeks back, I was digging around in a pile of WWI magazines, and was drawn (once again) to the myriad articles featuring Wingnut Wings models. This is Peter Jackson's model kit outfit in New Zealand. All their WWI planes are in 1/32nd scale...enormous by my gaming standards. But no one can deny the beauty and engineering perfection of these kits.

I decided to acquire one and build it. But which one? There are already numerous kits available, ranging from the early war DH2s to Gotha bombers. If I was to only do one of these kits it would have to be: a) a popular subject, b) rigging light and c) relatively uncomplicated in general structure. Hmmm, sounds like a Fokker D.VII. 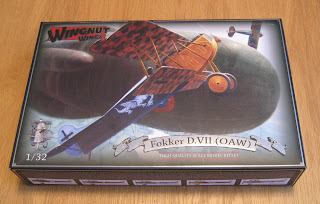 It arrived in the mail and I dug right in. Wow...big kit. And beautiful. 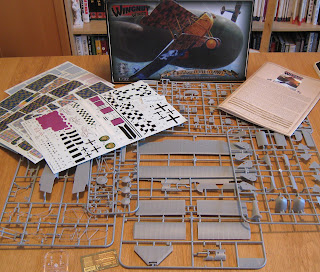 When I was placing my order, I wanted to do a largely lozenge fabric example. So many Fokker D.VIIs had elaborate paint schemes and these have been the subject of many modelling efforts. However, most D.VIIs were simply covered in lozenge fabric and then just painted with jasta-identifying tail and/or nose markings.

Wingnut Wings supplies numerous decal options for their kits. The closest I could come to my desired end product was an OAW Fokker (built by the eastern Albatross factory under license) flown by Fritz Schliewen, Jasta 6 in the fall of 1918.

That's his plane at the bottom of the decal sheet lineup. 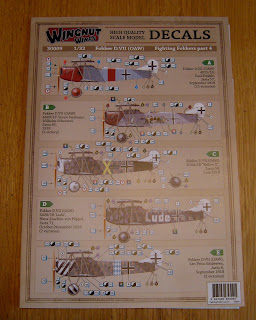 A very pretty plane. 4-color lozenge overall. Jasta 6 tail, wheel and nose stripes, and then a simple but distinctive personal marking...the Bavarian diamond band around the middle of the fuselage. 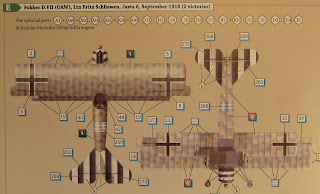 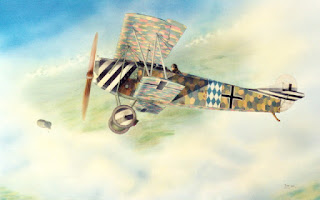 There are only a couple of known photos of Fritz Schliewen. Here he is sitting on the back of his D.VII. This was likely taken in late August, 1918. 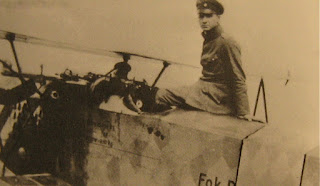 Researching WWI pilots is difficult at the best of times. So many records have been lost or destroyed over the past century. Schliewen turned out to be very tough to get background information on, particularly since his last name had two spellings. He was also known as Fritz Schiemann.

Here's his history, as best as I can reconstruct it. He was born in 1897. He entered the German air force at age 17, in 1914, and became a two-seater pilot. He flew artillery spotting aircraft for most of the war. However, at the beginning of August, 1918, he entered Jastaschule I (fighter school). He graduated in mid-August and was immediately posted to Jasta 6 (part of Jadgeswchwader I, Richthofen's famous flying circus). There, he earned two air combat victories.

His first was at 3:25 PM on Thursday, September 5th, shooting down a British observation balloon while on a mission with fellow Jasta 6 pilot, Richard Wenzl. The balloon's observer, Sgt Woolgar, jumped to safety. See the painting above for an image of that afternoon's action.

His second and final victory came on October 29th at 4:25 in the afternoon, when he downed a SPAD XIII (likely French). Little is known of this particular action.

Schliewen survived the war. Although details cannot be confirmed, it seems he died in 1945, at age 48, while fleeing with his family from the Russian advance through Eastern Europe near the end of WWII. That was certainly a dangerous time, and a bitter end.

On to the build.

This week, I started into the cockpit. The Wingnut Wings instruction book is wonderfully put together, and very detailed. The parts are small (and there are many of them), but construction is clear and straightforward. 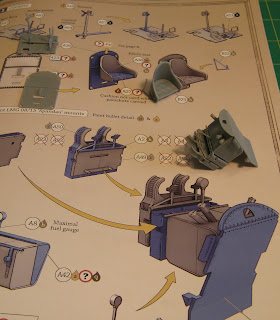 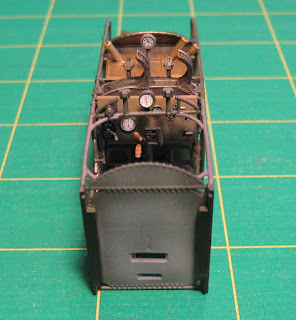 Love all the details in this kit. Too bad a lot of it will be covered up when the fuselage goes together! 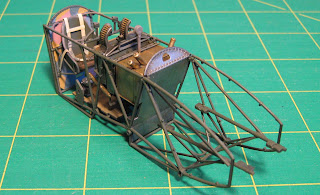 One final view of the assembly. 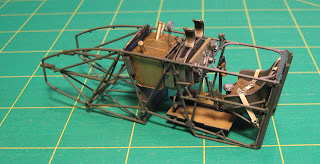 Taking on this project will certainly eat into my game model productivity for the year...but it's nice to change things up for once. Looking forward to getting deeper into this project.